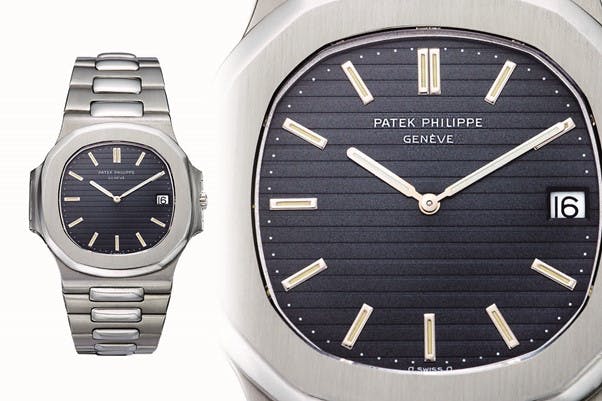 The Patek Philippe Nautilus is probably the most surprisingly successful watch in the whole of the watch world. It wasn’t a success for years after its launch, but the current status of this watch is extraordinary. It is, without doubt, the single hardest-to-get watch at retail value in the whole world. People are regularly paying 3x the retail price for this watch in the second-hand market, for brand new examples. The Retail price is around $40,000.

Last Saturday a version with a specific dial made for Tiffany & Co. was sold for charity and the hammer price was a mighty $5.35 million dollars. For one watch, made of steel. This thing is a big deal, and this is its story.

The origin of the Patek Philippe Nautilus

The Nautilus has a surprising origin story. The most famous watch designer of all time, Gerald Genta, was having lunch in a restaurant and noticed some senior members of Patek Philippe sitting across the room. He had been musing about making a watch based on a porthole, and was on a roll of designing radical chunky watches in steel. He had recently launched the Royal Oak watch for the company Audemars Piguet, which shocked the watch world and was a totally new departure for the company.

He went to Patek Philippe President Henri Stern to present his design, and lay out his vision that Patek could benefit from having a new expensive steel sports watch in their line-up. This is the sketch that he presented:

Original Sketch for the Nautilus by Gerald Genta. Image from Gerald Genta via Monochrome Watches

Henri Stern was a keen sailor and regularly competed in races on Lake Geneva. He recognised that a waterproof sporty model was something Patek had never offered. Unlike the rest of the industry, they had no heritage in racing or diving watches to draw from. This would be something completely new.

This model is known as the Reference 3700 and was available in steel first and then later in gold. The shape is of a smoothed octagon, and on each side there are two “ears” which represent the hinge of a ship’s porthole. You can see them represented in the sketch above. In the 1970s it was not common or easy to make experimental cases in stainless steel, and it took Patek Philippe two full years to get this case right. It opens forwards, not backwards, and to service the module you take it out from the front. This is known in the industry as a monobloc case and is quite different to the vast majority of watches, and indeed every other Patek Philippe watch.

This photo, courtesy of Monochrome watches also shows the porthole hinge of the case on the first model. The bracelet was also radical. This was the first bracelet to make H shaped pieces that are attached to the middle rounded pieces. Each bracelet has roughly 150 pieces, and all of them are polished by hand. This is still true for the bracelets sold today.

This was a massive watch for the time, at 42mm across, and despite being made of steel not gold it cost $3000, or the same as a Jaguar car! Everything else that Patek sold was in precious metal, before this watch they had only made a handful of steel models. It was a huge departure for them, and a radical bet on the future.

The Nautilus took ten years to be a success

It was launched in 1976 and was not a roaring success. In fact, it didn’t do anywhere near as well as they had thought it might.

This may seem crazy when you know how popular it was now, but it has taken a long time. In hindsight, they were just early. In 1980 they released a small ladies version at 27mm across, which was half the size, and powered by a quartz movement. In 1982 they released the second extension to the Nautilus family, releasing a model called the Reference 3800 which was 37.5mm in size. This was the right size at the right time.

Coupled with a wider growth in awareness of the Patek brand thanks to other product launches such as the new Calatrava, and a fantastic ad campaign focussing on how confident you will be when you own a Patek, the Nautilus finally started to sell.

Patek Philippe brand advert from the 1980s, emphasising how it makes you feel.

Original Nautilus Advert from the 1970s

The Nautilus range grows up

Patek Philippe is famous for thinking ahead and moving very deliberately in the watch world. Four generations of the Stern family have guided the company very well over the last 90 years, and the development of the Nautilus range is a great case study of how they succeed. In its first 20 years, not much changed. They released a few different sizes and experimented with the dial. However after 1996 things kicked up a gear, and the watch became a platform for many of Patek Philippe’s greatest complications, or functions. There are chronometers, or stopwatches, annual and perpetual calendar modules, and a very fancy travel time model. The range is now available in steel, gold, rose gold and platinum with a variety of dial colours.

This had two effects; firstly, to make it clear that despite being a chunky waterproof sports watch this is a range that features the very best movement design that Patek Philippe produces, and secondly to ensure that the simplest models, showing only the time and date remain rare. Now known as the Reference 5711, the simple steel Nautilus is one that Patek are not too fussed about selling as it is the cheapest. The message is that if you want a Nautilus you have to be prepared to spend on something fancy.

What next for the Patek Philippe Nautilus?

Last week we wrote about this special limited edition with Tiffany & Co. created to celebrate 170 years of working together. One then sold for $5.5mn at auction! They have promised that the Olive Green dial model currently on sale is the last of its type. It is the most hyped and most in-demand watch in the world. Where do they go next?

Fans and collectors will undoubtedly be waiting a while for what comes next, and knowing Patek Philippe, it may not be quite what people are expecting.

We at The Watch Collectors’ Club do not have a favourite brand or watch. We like to explore the icons of the watch world as much as we like to explore new microbrands creating new timepieces from scratch. Sometimes the history of an icon teaches you more about how a brand works than anything else you can learn about them. This is certainly true for Patek Philippe.

If you’d like to know even more about this company, we are excited to present a virtual event exploring the history of Patek Philippe and some of its most famous watches, including the Nautilus, on Monday 20th December at 8PM via Zoom. If you would like to join us, please reply to this email or register here.