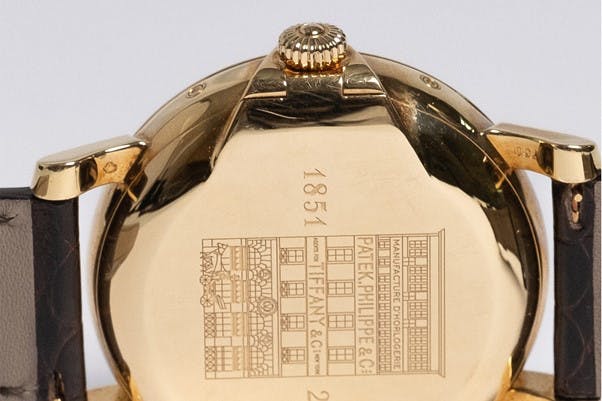 This week has seen the launch of an exclusive watch that commemorates the 170th anniversary of the relationship between Swiss watch company Patek Philippe and American Jeweller and Silversmith Tiffany & Co. Whatever your opinion on the watch, a marvel in steel and Tiffany blue, the relationship between these two famous firms is a fascinating story. This blog post will explore how it works, how it came about, and what it’s meant for watch lovers.

It all started when Antoine Norbert de Patek, one of the two founders of Patek Philippe, went to the United States to try and sell watches. He visited Charles Tiffany, the founder of Tiffany & Co. in New York, but while he impressed the company, he came away disappointed. On a trip that included robberies, bad weather, floods, and all kinds of hardships, he worked very hard to get Patek Philippe watches better known.

Fortunately for him, a few months into 1855 a huge order arrived for 129 watches of all different kinds, including high-end engraved and jewelled pocket watches. At this time most retailers would place an order for a handful of watches at a time, and indeed most still do this today. Tiffany was by far the largest jeweller in the world, and the US market was wide open for Swiss Watch Companies including Patek Philippe.

The outside of Queen Victoria's Pocket watch, with Brooch clasp, in Gold, Blue Enamel, and Diamonds.

What is a Patek Philippe Authorised Dealer?

An Authorised Dealer is a retailer or jeweller that buys the watches from Patek Philippe first and then has to sell them. It does not take orders and then relay them to Patek. The retailer has to decide which watches it can sell. The retailer orders watches from Patek, pays for them, and then sells them to customers. This has been true since Patek was founded in 1851, and remains true today. In the case of Patek Phillippe, the company has flagship stores in some cities, where you are buying directly from the company, but every other place you can buy their watches, including Tiffany & Co. you are buying from an authorised dealer.

Until the start of online watch sales, you could rarely buy a watch directly from a manufacturer. To confuse things further, there are online authorised dealers who have no physical stores, and authorised dealers across the world are now happy to sell watches to clients in other countries. If you have any doubt whether the website you are on is an authorised dealer, you should just email them to ask before making a purchase. For more information about buying online, we wrote a guide here.

Tiffany enjoyed great success in the 19th Century in America. They became famous for their jewellery, watches, clocks, and silver goods. As well as importing and selling Swiss timepieces, they sold American clocks under their own name, and in the early 1870s built a factory of their own to produce watches in Geneva. It had the very latest technology, almost unheard of in Switzerland, using American machinery and a steam boiler power plant.

Interestingly, they only had the factory for four years before selling it to Patek Philippe. After this short experiment, realised that Tiffany did not need to concentrate on making their own watches. Instead of “made by Tiffany” they could market Swiss brands “made exclusively for” Tiffany. In 1878, the factory, equipment, and managing engineer all transferred to Patek Philippe and Patek gave a five-year exclusive contract to Tiffany to sell their watches in the United States.

Tiffany watches in the 20th Century

Astonishingly, Charles Tiffany’s son Louis did not have a high opinion of watches. While he was an extraordinarily successful designer in the Art Nouveau style, he did not appear to believe in the move to the Art Deco style and invested no time at all on watch design. This led to Tiffany & Co. selling Swiss watches as before, but without any focus on their own design philosophy. The relationship with Patek Philippe continued of course, but it was not until 1980 that Tiffany re-entered the watch world with their own designs. The crucial feature that Tiffany retained throughout their relationship with Patek was the prominence of the Tiffany & Co. logo on the dials of the watches sold by this dealership. No other retailer currently benefits from this joint branding, and it makes the watches especially collectable.

A Century of Patek Philippe Quality

If there is one thing Patek have maintained as a key selling point, it is extremely high-quality timepieces. Over the 20th Century they have designed, build and sold a large number of watches of extreme beauty, often with interesting complications, or functions. For example, in 1925 they produced the first wristwatch with a perpetual calendar, a calendar that will tell the correct date including leap years for over 100 years, so long as the watch remains wound up.

The company introduced many iconic timepieces and next week’s blog post will explore some of these in detail. On Monday 20th December 2021 at 8:00PM UK Time  The Watch Collectors’ Club will be hosting a Virtual Talk on the company and their watches, and you can find out more here.

To bring things right up to date, Tiffany and Patek Philippe have combined their design might on two watches. The first celebrated their 150th anniversary of working together in 2001 and is an interesting Annual Calendar model. This stands out not for the overall design, which stems from Patek’s long line of calendar watches, but for the stunning T shape that replaces the 12 o'clock numeral. This is very unusual, and I think quite fun. They made 450 of them in three different metals, and they are beautifully engraved on the back.

The T150 Collaboration between Tiffany & Co. And Patek Philippe to celebrate 150 years of working together, the Ref. T5150

The engraved caseback of the T150 watch showing an old storefront with Tiffany and Patek Philippe signs.

This week saw the launch of an even bolder model, in celebration of the relationship’s 170th year. They have produced the most iconic Patek Philippe watch, the Nautilus Reference in steel, and added a dial coloured Tiffany Blue with the retailer's name written underneath the brand name. They are making 170 of these, and if you like it, there is one for sale for charity in the Phillips auction this weekend. As this is published the rumours are that it will sell for over $2 Million. As you can see, it is gloriously Tiffany Blue:

The Tiffany Nautlius released in honour of the 170th year of authorised dealership with Patek Philippe. Photo Credit: Philipps

We at The Watch Collectors’ Club enjoy the finest and fanciest aspects of the watch world as much as the simple and sturdy. Companies with such long heritage as Tiffany and Patek Philippe can be enjoyed for their ongoing commitment to interesting design and quality timepieces, even if their rarity and value make them unlikely to feature in most people’s collections. The watch world is likely to see many more interesting partnerships over the next decade as collaborations bring fans of multiple brands together. We look forward to seeing what is created.

We are here to help you learn more about all aspects of the watch world, so please feel free to get in touch if you have questions. Exploring the watch world is best done together, so tell your friends about us, and if you want to join the virtual event on the 20th December, just register here. Find us on Facebook, Twitter, Instagram and LinkedIn, and we hope we will see you at one of our events soon.

We explain how starting a small watch collectioncan be very easy

What is a Sports Watch?

We consider sports watches of all types.