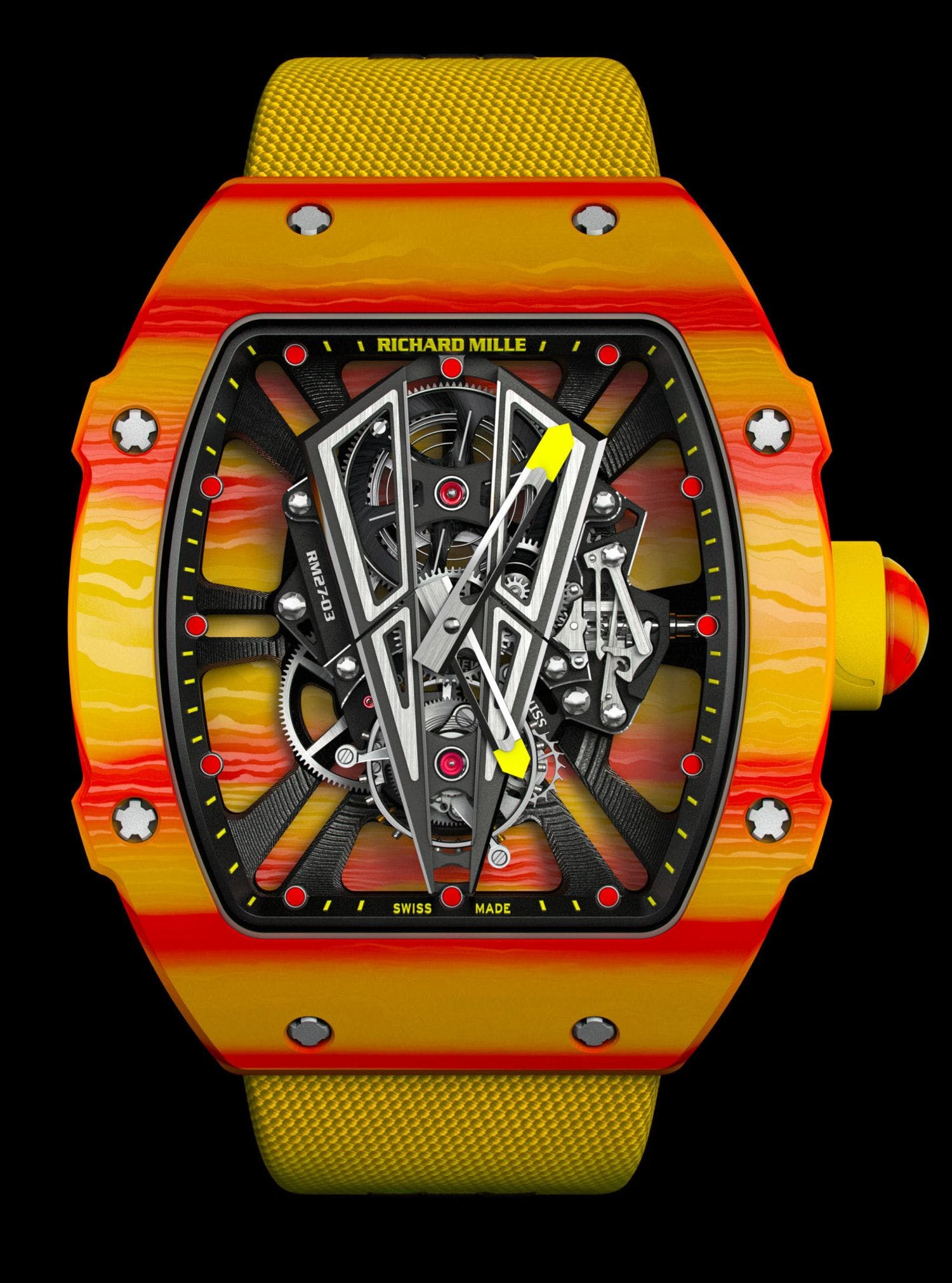 Watching the Wimbledon tennis tournament, you might have noticed that Rafa Nadal, one of the greatest tennis players of all time, wears a watch whilst he plays matches. You’ll probably be surprised to learn that the watches that he wears cost well over half a million dollars each. Even for an incredibly wealthy athlete, that is a very expensive watch to be bashing around for many hours at a time. However, the watches he wears are designed to be worn in extreme circumstances. They are made by a brand called Richard Mille. Long-term readers of ours might remember the name from this article exploring unbreakable watches. This blog explores the brand in more detail.

A New Type of Luxury Watch

9 of the 10 largest Swiss watch companies by revenues is at least 100 years old. Richard Mille, the 7th largest Swiss watch company by revenue, is the exception. It was founded in 2001 by Richard Mille and Dominique Guenat. Both men had worked in the watch industry for most of their lives and the brand Richard Mille was established when the namesake turned 50. He wanted to create a brand that pushed watchmaking further than anyone else, with the sole aim of creating “the watch of his dreams”.

There are thousands of watch brands, which makes it very difficult for a new brand to make something truly new. Richard Mille managed it with their first watch. They achieved this by doing something quite unusual. They paid almost no regard to the production cost of the watches they made. This meant that they could push the boundaries of watch design and micro-engineering to create watches that were totally unlike anything the watch industry had created before. They partnered with the highest-end suppliers and component manufacturers in Switzerland, and challenged them to create parts that were totally novel to the high-end Swiss market.

When the RM001 watch was released in 2001, the watch industry took a collective gasp. The watch set the tone for Mille’s brand identity. A tonneau-shape case housed a partly see-through movement of the highest standard. The movement itself had a tourbillion (a movement that spins in a centrifuge to offset the effect of gravity on the movement) which for every other watch brand would only be put into delicate dress watches, due to the movement’s fragility and cost. No so for Richard Mille. This watch was designed to take anything you could throw at it. Every part of the design was there to improve the robustness of the watch, which meant that high-horology became wearable on an every-day basis for those with very deep pockets. And you needed (and still need) very deep pockets to purchase a Richard Mille watch. The first model, the RM001 Tourbillion cost approximately $150,000 upon release.

Richard Mille has always been driven to make the most robust watches that money can buy. Whilst other brands are making sports watches out of steel, titanium or plastic, Richard Mille is working with materials right at the cutting edge of technology. They have pioneered the micro-engineering of materials such as NTPT carbon fibre, which is used on F1 cars, satellites and the sails of racing yachts, and ALUSiC which is used for thinks like brake pads. The manufacturing process for watch casing using these materials is fascinating and it is worth following those links to find out more about it.

Whilst most brands add weight to their watches to add value, either through gold or complications, Mille does the total opposite. They try to make their watches as light as possible, whilst also making them as close to indestructible as possible. This suits high-performance athletes, such as the golfer Bubba Watson, who wore bracelets before Richard Mille made him a watch, the F1 driver Felippe Massa, who wasn’t allowed to wear a watch due to the added weight, and sprinter Yohan Blake, who found a regular watch was off-putting when he was racing.

However, it is Rafa Nadal whose signature Richard Mille watches probably most accurately reflect the technical prowess of Richard Mille. Until they met in 2008, Nadal refused to wear watches, both on and off the court. Richard Mille convinced him to test a new light watch that he was designing, and together they developed the RM 027 – which would become the lightest tourbillon watch in the world at less than 20grams including the strap.

Over the next decade, the collaboration would continue to push the boundaries of what a high-performance , high-end, watch could be. For example, the RM27-04, which Nadal is wearing at the 2022 Wimbledon tournament weighs 30grams, which is about the same as two CDs (without packaging), and is capable of withstanding 12,000 g-force. The watch movement is held in place by four braided steel cables that are each 0.35mm in diameter.

Whilst you are watching this years’ Wimbledon tournament, take a look at Nadal’s watch. We are sure that like us, you’ll marvel at the engineering that has gone into creating something that can withstand the constant movement of one of the world’s greatest tennis players.

If you are interested in learning more about the history of all of the Richard Mille models, it is an incredible story of constant technical achievement and an enjoyable read. The Watch Collectors' appreciates all the different watches that the industry has to offer, even those that we cannot afford.

If you want to explore along with us, join our mailing list to hear about our online and in-person events, and follow us on Social Media.

Why are some time-only watches so expensive?