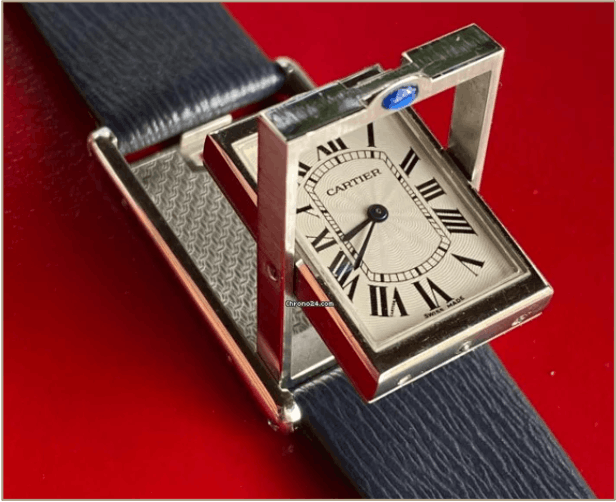 Last night, we held a showcase event exploring the wide variety of watches from the largest watch groups in the world. We’ve written short introductions to LVMH, Seiko, Citizen, Richemont and Swatch where you can find out more about the brands within these groups.

Hamish, our CEO, shared his Jaeger LeCoultre Reverso. Jaeger LeCoultre was purchased by the Swiss giant Richemont in 2000. JLC make a huge range of high-end automatic watches, but their most famous watch is the Reverso, named for the fact that the case can be reversed to protect the glass. The Reverso was the world’s first sports watch, designed in 1931 to be worn whilst playing polo. The story of how this watch was designed is fascinating. You can read about it here. The Reverso was Hamish’s “grail watch” for many years, and he particularly likes the Art Deco dial of this model from 1946.

The case being reversed

Stuart ‘T-S’ showed his most recent purchase, a Casio G-Shock GW-M5610 -1ER. Stuart was inspired to buy this G-Shock after a trial event The Watch Collectors Club ran over the summer, which had explored how to start a watch collection. This model reminds Stuart of the first watch he owned as a child; however, he now has a greater appreciation of the watch’s technology. Some of the features include: solar power, radio-updated world-timer, an overnight power-saving feature, and an LCD display that will outlive any owner. Like most watch collectors, Stuart is worried about damaging his watches, so was attracted to the robust-ness of the G-Shock range. The picture below shows him wearing it whilst sanding and fitting new garage doors.

Ed, the co-founder of the club, shared someone else’s watch with the group: an IWC Portofino. The watch belongs to his partner’s father and is often borrowed on visits to Cornwall. Like JLC, IWC is one of the high-end brands owned by the Richemont group. Ed’s favourite features of the watch are the rose gold case, and the contrast between the indices, which are both lines and roman numerals, and the grey face. The watch looks larger than it is, because of an optical illusion caused by the slim bezel.

Like Hamish, Ed is a big fan of Jaeger LeCoultre watches. He also talked about his perpetual Calendar from the brand.  This watch dates from the early 1990’s, and was bought at auction. Perpetual calendars are very complicated watches. They denote the day of the week, the date of the month, the month, the moonphase, and the year. What is particularly special about perpetual calendars is that the automatically adjust to the 29th of February on each leap year. Ed loves the variety of subdials on the watch, the blue and gold moonphase, and the cream enamelled dial. The watch is very fragile, so he only wears it on special occasions.

It has a beautiful moon phase

The second watch Hamish explained was another Jaeger LeCoultre, a WWW Dirty Dozen. The Dirty Dozen watches are famous military watches coveted by collectors all over the world. The British army commissioned 12 watch manufacturers to follow a design brief for a simple, reliable military watch in 1944, all called WWW or Wrist Watch Waterproof. The watches had to have a brass case painted silver, black dial, luminescent indices and hands, and a screw-down case. The 12 different watches were almost identical, and were delivered in April 1945, shortly before the end of the second world war. Most of the watches were sold after the war in Army surplus auctions, and it is rare to find one in original condition, such as this one. You can read more about the fascinating story of the Dirty Dozen here.

The screw-down case has WWW marked on it

Stuart ‘K’ showcased his Omega Seamaster Aqua-Terra. Omega is owned by the Swatch Group. Stuart has been collecting watches for a long-time and has an extensive collection; however, he thinks he wears this watch more than any other. The Aqua-Terra is a less-well known model in the Seamaster range. This model is the smallest automatic watch in the range, at 36mm, and is a rare “B Series” model. The “B Series” was created to fix problems with the reliability of the movement in the “A Series”. It was produced for a very short period of time, and there are now very few “B Series” left in original condition. Whenever a “B Series” Aqua-Terra goes to Omega for a service, they replace the movement with a more modern version. Stuart thinks these watches are excellent value for the money, not least because they are easier to find than their competition from Rolex.

An Aqua-Terra similar to Stuart's

The event concluded with a discussion of two Cartier watches that we at The Watch Collectors Club are really interested in: the new Tank Must with Blue Face, and the Tank Basculante. Both utilise the famous Cartier Tank design in different ways. The Tank Must is a very simple watch with a striking blue face, designed to attract younger customers to the brand. The Basculante is Cartier’s answer to the JLC Reverso; the case allows you to rotate the face to protect it from damage. It is also Hamish’s latest grail watch.

The new Cartier Tank Must

The Watch Collectors’ Club aims to make the watch world simple and accessible to our members, and these virtual events are a great way to explore the variety of the watch world. Our events are designed so that members can share their passion, and hopefully learn something interesting. Make sure to keep reading our weekly blog so that you don’t miss out on our next event.

If you know anyone who might be interested in learning more, or has some great watches to share, please let them know about us. Communities are always better when they have lots of members.

Glashütte, the home of German Watchmaking

Event Round-up - The Watches We Saw