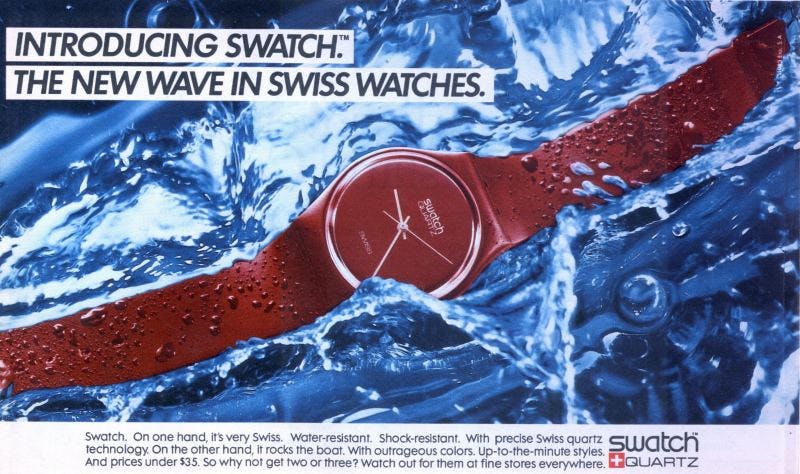 The Swatch watch is an icon for many reasons. It is a design icon. A low cost option who need to wear a watch as a tool to tell the time. It helped save the largest watch company in the world, and it has pioneered the display of radical modern artwork on watch faces and straps. It has inspired young people to love watches and collect interesting models. It introduced rubber straps which are now being sold by the very finest watchmakers on earth. It comes in more colours and designs than you can imagine, is sold everywhere, and the best thing of all? When the battery runs out they will replace it for free in store.

One of the first advertisements for Swatch in the USA from 1983, with sporty associations and the tagline "The New Wave in Swiss Watches"

Why is the Swatch so famous?

The Swatch was launched in 1983 and was an instant hit. The simple looks, accurate quartz mechanism, waterproof case and comfortable rubber strap all at a low price, were very appealing to the public. Bright advertising with Red and Blue watches, and brochures full of fun activities showed this was an exciting watch for all ages.

Lightness on the wrist and a range of small sizes made it very easy to wear. Within a couple of years of launch, the company responsible for this watch, then called ETA, were producing all kinds of crazy designs. They were limited edition, often in conjunction with up and coming young artists, and were released in what today we call "drops", launch events at swatch stores where people queued for hours to get one.

The watch has been hugely popular ever since, selling over 100 million in itd first 10 years.

A Standard size men's Swatch. This design is unchanged since 1983, although the variety of dial, hands, numerals and strap colour runs to thousands of options.

Where did it come from?

The goal of the ETA company was to produce a low-cost watch that was still Swiss Made. At the time the industry was under intense competition from very low-cost digital and quartz watches that flooded onto the world market in the 1970s from Japanese companies such as Seiko and Citizen . The Swiss watch industry struggled and consolidated. To get the price down they had to not just make something powered by a quartz electric movement, they had to be able to make it cheaply too.

The answer was to make it out of plastic. This was radical at the time as Switzerland was a country famous for centuries of case making, but a plastic injection moulding machine was cutting edge and extremely expensive. The ETA company (now Swatch Group) bought one and it took them 15 months to make a prototype work.

They welded the case together and reduced the whole thing to 51 parts, far lower than any other watch made in Switzerland. The original design was all black with a black dial, but the most obvious way to stand out was to use different colours of plastics. This led to the explosion of designs that are the hallmark of the range.

The range of Swatches available at launch in 1983.

Swatch remains an enormous watch brand, with a range of products across different price points. Over the last 40 years, they have added Chronographs, all metal versions, new movements, other interesting functions, and of course, numerous limited editions are on sale at any one time.

Most interestingly, they now have a service where you can design your own Swatch. Using the template of a see-through Swatch in two sizes, they provide different imagery for you to move around until you get exactly the design you want on your watch. They do collaborations and have both geometric and visual images to choose from. This is a fantastic way to get a unique watch at a reasonable cost. The images available change regularly, so it is worth checking every now and again to see if something catches your eye.

This unique Scottish Watches Swatch is owned by the Author. The Scottish Watches podcast commissioned an image, and the buyer could move the watch around on the image to get the design they wanted. I chose this for the image of Edinburgh Castle, to remind me of my time in Edinburgh.

In 2022 Swatch did something truly radical in collaboration with their Sister brand in the Swatch Group, Omega. They created a Swatch-style Moonwatch. The Moonwatch is the name given to the Omega Speedmasters which have been to the moon, in particular the model that was first to be worn on the moon in 1969, the Reference 105.012. This year, Omega have contributed many design ideas that have been seen on various Omega Speedmaster Professional Moonwatches over the years, and Swatch contributed their expertise in making quartz movements and plastic cases. To make it even better, they made the cases out of Bioceramic, which is partly made of biological material to make it more environmentally friendly.

This watch is called the Moonswatch, and has succeeded in boosting the profile of Swatch and also the Omega Moonwatch. The watches are only sold in boutiques and have been sold out daily since launch. The range of colours and design details combined with the Moonwatch heritage has been very popular.

This collection is not limited in production and is expected to be sold for many years. It is likely Swatch look for more combinations with other brands to continue their long history of exciting and unusual designs.

The Moonswatch Mission to Jupiter watch, with design colours matching the planet Jupiter.

There are plenty of Swatch collectors! Even people who love mechanical watches have often been tempted by an interesting and colourful Swatch. There are so many interesting designs, often very contemporary with the style and art of that year, that there are many collecting options, suiting everyone's taste. There are famous see-through versions, versions with artists who went on to become superstars, versions containing famous historic artworks or landmarks, and as mentioned above, now there are unique, customer-made versions. In 2015 a collection built up over 25 years sold for a total of $6mn USD in Hong Kong, and it contained 5800 watches, every one a Swatch.

A small search online reveals there are Swatch collectors out there with hundreds of models. This compares to the author's more modest 4, three of which he wears and one of which he keeps "box fresh" and unworn.

The flyer Keith Haring designed for the Swatches at his Pop shop in New York in 1986. The Swatches he designed are now some of the most valuable of all.

An aggressive Swatch ad from the 1990s, showing their Pop design. This style of ad was unheard of in the watch industry before Swatch, and hasn't really been replicated by any other brand since.

Swatch watches are affordable, varied and highly collectable. They're fun, easy to wear and attractive to all ages. We at The Watch Collectors' Club enjoy appreciating all kinds of watches, from the simplest and affordable models to the most complicated hand-crafted masterpieces. What matters is what suits your collection and your taste, and Swatch certainly has options for all. We look forward to seeing your Swatches at our events in future. You can find all the details on our events page and on our Social Media channels.

An ad too good to leave out. This ad for the 1990s Swatch Skin collection is incredibly radical for a watch advert. Absolutely crazy that Swatch worked with supermodels to promote their low cost, fun friendly brand, but they did, and it worked!

What to look our for from The Watch Collectors' Club

Adventure Watches for Any Activity

The watches of Queen Elizabeth II

We explore some of the watches in Her Makesty's Collection