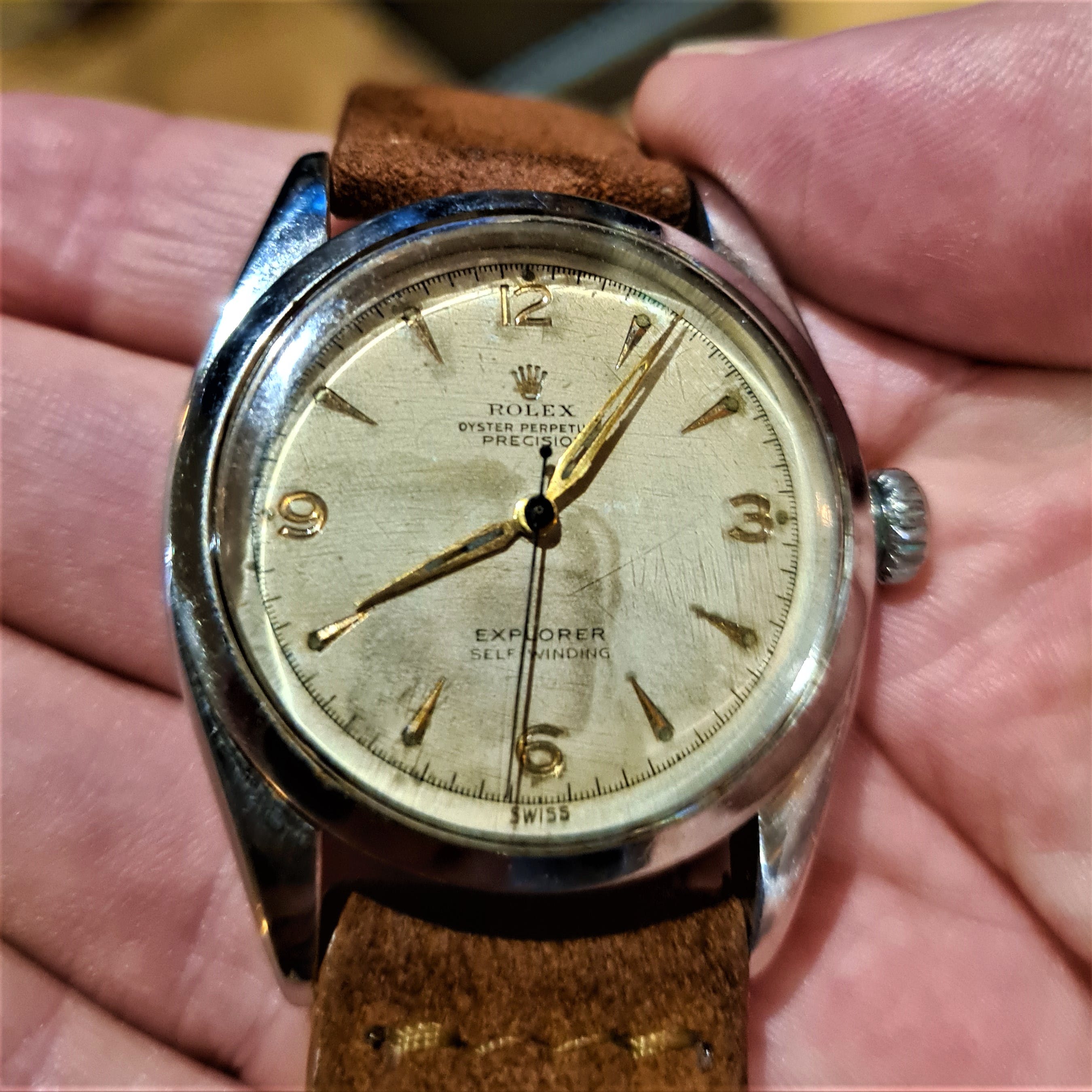 The Rolex Explorer is a very famous watch and a key part of the Rolex lineup. It is a watch that's changed little over the last 70 years and remains a simple and popular option for many. The most famous story connected to it is highly controversial. Today's Blog Post will introduce and explore the watch and the controversy.

Why did Rolex create the Explorer?

In the 1940s and 1950s Rolex were busy creating watches that were ever more practical and useful for their customers. Having established a reputation for quality and seen great success with the waterproof Rolex Oyster and Oyster Perpetual in the 1930s, Rolex needed to move on. They introduced the Submariner, a dive watch, and the famous Day-Date calendar watch, but also wanted to update the Oyster Perpetual to be more robust and hard-wearing.

Many watch companies at the time were also focussing on this, including the largest British watchmaker of the time, Smiths. Both Rolex and Smiths sent their watches with mountaineering teams so they could test them in the most extreme environments. They wanted to prove these watches stood up to long days of vigorous activity and huge temperature ranges.
The British Everest Expedition of 1953 was sponsored by Smiths, so 15 watches were sent along. Rolex gifted 10 pieces to the British members of the Expedition. The stage was set for one of them to be worn to the summit for the first time.

Which watch was first to the Top of Everest?

Edmund Hillary and Tenzing Norgay were the first climbers to succeed in summiting Mount Everest on May 29th 1953. However, in 1924 an expedition was run by the British climbers George Mallory, with their final climb starting on June 8th. Sadly, they never returned from the attempt. In 1999 Mallory's body was recovered, including the watch in his pocket. This was a watch in a Borgel case with a Fountainmelon movement and would have been very expensive at that time. Since it is not known if Mallory achieved the summit before he fell to his death, we cannot say for sure that this watch reached the summit.

So what happened with the Rolex and the Smiths?

Well, here the story gets interesting. Rolex have always been famous for their marketing and this story is one of the most interesting marketing coups of the 20th century. Rolex's advertising agency, J Walter Thompson paid a reporter from The Times newspaper in London to message them in code announcing the expedition's success. As a result, Rolex ran an advertisement on page 3 of The Times on June 2nd, claiming that their watch was first to the top of the mountain. The news story exclaiming the achievement wasn't even until Page 7 of the Paper.

Smiths didn't get their advertisement published until three days later on June 5th. Rolex was also clever in two other ways. They hosted a party for the whole Expedition in Bombay as they were travelling back to England. At the party, they gave out more gold Rolexes, and by the time the party arrived back in London Edmund Hillary, Tenzing Norgay and expedition leader Colonel Hunt were all official Rolex ambassadors. Unsurprisingly they did not discuss Smiths watches much from then on.

Hillary and Norgay on the Everest Expedition. Photo credit www.rolex.com

Was a Rolex the first watch to the top of Everest?

Unfortunately, the answer is probably no. Many Rolex fans have undertaken a detailed photographic study of the pictures from the expedition and they believe that neither Hillary nor Norgay were wearing one when climbing the mountain, not least because Norgay is clearly wearing a steel watch in all the pics, and the Rolex he owned at the time was gold.

The best evidence however comes from the Managing Director of Rolex UK at the time. In September 1953, the Managing Director of Smiths was clearly annoyed at the success Rolex had with their claim to be first and their subsequent marketing of the newly launched Explorer model. He wrote to the leading watch magazine of the day, the monthly magazine of the British Horological Institute (which still exists and you can find them here).

Here is what he said, and I've highlighted the relevant part:

Now this could just be another marketing claim if it Rolex hadn't replied, in the October issue, with this clear admission:

For anyone familiar with the norms of the day, this was a genuine attempt by two leading figures of the industry to set the record straight and avoid being called liars. That is why the Rolex Director wrote in when he didn't have to. If you examine any Rolex ads since that first one, not a single one claims that their watch was on the summit first, they simply state (a lot) that Rolexes are often on Everest, worn by the bravest climbers.

They have never reduced their association with climbers and still sponsor mountaineers as influencers today. They remain proud of the Explorer watch, and it is branded as a tough go-anywhere timepiece. However, it is fairly clear that it was not the first to the summit.

The Smiths watch was a Smiths Deluxe, or A409 and Hillary gave it to the Worshipful Company of Clockmakers in the City of London. It resides on display in the Science Museum in London.

One of the reasons Rolex is so large and famous today is precisely because they were willing to create interesting marketing stunts over the course of the 20th century. Their continued efforts to associate themselves with adventure, feats of bravery, and interesting people have maintained a level of quality associated with their watches. Rolex customers associate the brand with success and its stories like this that made it this way. Fortunately for their customers, they make great watches.

The Evolution of the Explorer

Rolex launched the watch formally known as the Explorer in Summer 1953. The first reference number was the 6350, which remained very simple and added the no famous 3, 6 and 9 indices on the dial to make it easy to read. They also made the black dial option standard for the same reasons.

In 1956 the 6610 was introduced with the Mercedes style hands and again the bold numbers in luminous paint. The introduction of the 1016 in 1963 was another upgrade and was important as it stayed in production for over 25 years, making it possible the single-longest Rolex reference in production. In 1989 it was replaced by the 14270, which shows the indices and numbers lined in white gold. It is still pretty much the same today.

This model has not changed much and has been on sale for nearly 70 years. This shows the incredible staying power of Rolex. They make watches people want, improve them consistently, and deliver reliable designs. Coupled with the interesting marketing tactics and strong brand image, it keeps the company and their watches at the top of the industry today.

We at The Watch Collectors' Club want to help everyone explore the world of watches. We want to bring you the interesting stories that are behind the watches we see on the market, and we want to help you share your watch stories. Our regular meetups are the perfect place to come and learn more about watches like the Explorer and tell us which watches you like and would love to know more about. At our next one, we will be exploring and comparing the brands Tudor and Breitling and it's taking place on April 12th in Central London. You can find all the details here.

What is a Tool Watch?

How To Buy A Watch In A Store