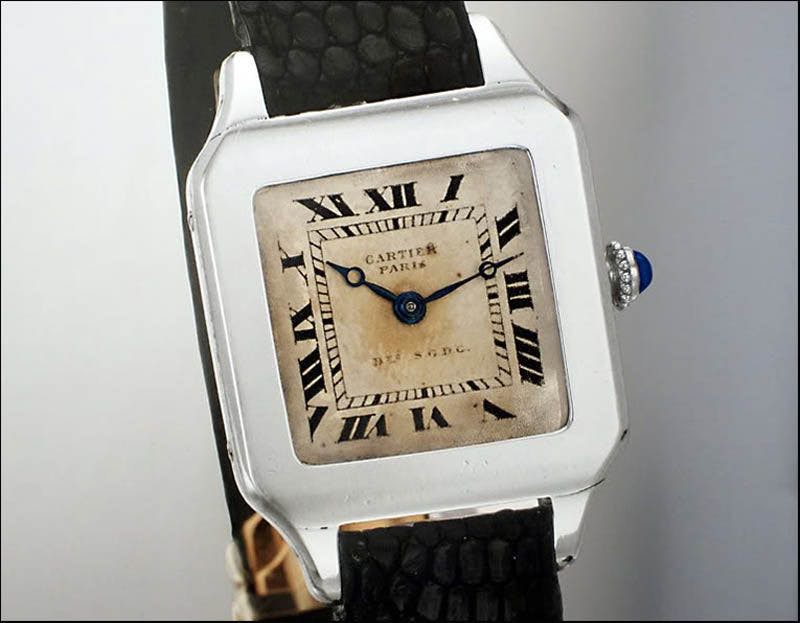 Watches have been important since the earliest days of flight. When in the air, timing is crucial for navigation, and early experiments in balloons and airships showed that timing distances accurately while in the air would be crucial to getting to where you wanted to go. With the invention and rapid of aeroplanes in the early years of the 20th century, the distance they could fly increased.

This dramatically increased the risk of getting lost and travelling past the place you were trying to reach, especially if visibility was limited. Timing distance travelled at set speeds on certain headings, or directions, was crucial. You might think the obvious thing to do was to strap a clock or pocket watch to the dashboard of the aeroplane. Unfortunately, the machinery at this time had a very high rate of vibration, which made it a difficult place to put a delicate watch mechanism, it just wouldn't have been very accurate. The device was also often hard to read if mounted in a difficult position.

The First Men's Wristwatch was a Pilot's Watch

The watch that is most famous for being the first regularly produced Men's wristwatch is the Cartier Santos-Dumas. Santos-Dumas was a rich playboy aviator trying to push the boundaries of flight in France in the first few years of the 20th Century. The problem he had was that he couldn't get his pocket watch out to read it while keeping control of the plane. He asked for a small wristwatch, and Cartier duly delivered it in 1904. In 1911 it was launched for sale and is still available today as the Santos du Cartier.

The Original Cartier Santos-Dumos, made in 1904. Image courtesy of cartier.com

An example of a Cartier Santos after being sold to the public in 1913. At this time it was still very unusual for men to wear wristwatches.

World War I changed the landscape for Men's wristwatches as they became much more widely used both during and after the war. While men had worn watches on their wrists while soldiering since roughly the 1880s, the huge number of men involved in the battles of the First World War saw huge demand for wristwatches.

The war also led to huge improvements in aircraft technology, and this level of innovation continued into the 1920s and 1930s.

Watches as Life-Saving Tools in the Air

Ambitious flying adventures and the realisation of the increased importance of air forces in military conflict led to a wave of innovation in pilot's watches. In 1927 the famous celebrity aviator Charles Lindberg flew from New York to Paris. This achievement was made more incredible by the fact that he didn't navigate and arrived almost entirely due to luck. Lindberg knew this and the following year went to the pioneer of aeronautical navigation, a member of the US Navy called Philip Van Horn Weems.

Weems invented two watch functions we now see as completely standard; the ability to stop the seconds hand moving while you set the watch, so that timing can be set to the second, and also the rotating bezel. The full explanation of how these help pilots can be found in this article, but the main thing to know is that both of these started in pilot's watches to help with navigation in the air when landmarks are not visible, such as at night or over the Ocean.

An original Weems designed centre seconds stopping watch from Wattnauer in the 1940s.

Weems watches were often made by Longines, who still make much of their association today. They were also often very large, up to 55mm in diameter, so they could be easily read at night. Another watch that was created in the 1930 and 40s for pilots was made in Germany and is famous for its size and design. It's known as the Calibre 52. This watch was ordered from a variety of German manufacturers, such as Glashutte, Lange & Sohne, and IWC.

An Original IWC Big Pilot watch from the 1940s

The Navitimer is the Ultimate Pilot's Watch

Another watch company closely linked with Pilot's watches and aviation is Breitling. In 1942 they introduced a world first, which was a watch with a Slide Rule Bezel. A slide rule is a type of calculator, and this function allowed pilots to make complicated calculations while in the air. It was first introduced on the Chronomat model, but in 1954 they launched the Navitimer.

This watch was designed for the American Owners and Pilots Association of civilian pilots in the USA. It features an updated and more sophisticated Slide Rule than the Chronomat and a Chronograph or stopwatch. Using these two features, the watch manual instructs a pilot how to calculate 14 different things, including how much fuel is left, distances, time at a speed, etc. You can see how useful these are to a pilot, especially if something has gone wrong. This watch was also very large at the time, measuring 41mm across.

A Modern Breitling Navitimer in the classic colours, with a black dial and white Slide Rule Bezel.

A Vintage Breitling Chronomat, the first Pilot's watch to feature a Slide-Rule Bezel around the outside, and Chronograph function featuring seconds and minutes.

Despite both Longines and IWC using the name Pilot as an officially trademarked name for their watch ranges, many watch brands today feature a line of watches inspired by these watches and aviation in general.

British Watch brand Bremont started only 15 years ago and is dedicated to aviation-inspired watches. They have been incredibly successful in building their brand and have a fascinating collaboration with ejector-seat maker Martin Baker to make their super tough MB range of watches. These have been tested to the same stresses as a pilot goes through if they are forced to eject in an emergency.

They have also created an interesting series of watches linked to historical aeroplanes. Breitling chose to do this with its Super AVI range celebrating American warplanes. Longines has recreated some of their most important watches from the 1930s, and IWC has made watches celebrating interesting feats of flying, such as a recent trip by a World War II Spitfire plane around the whole world!

An IWC Pilot Spitfire made to celebrate the globe-spanning flight in an original Spitfire war fighter from World War Two.

If you want a useful and easy to read watch with a lot of heritage, many brands offer something of interest. Modern brands such as Bremont offer a more up-to-date take on what a Pilot's watch can bring. We at The Watch Collectors' Club don't have a favourite Pilot's watch, but are here to help you explore them more widely. If you have any further questions please just ask, and we hope to hold events focussing on Pilot's watches in the near future.

What makes a good Watch Case?

A history and guide to different watch case designs, including some historic lots of examples and different styles.