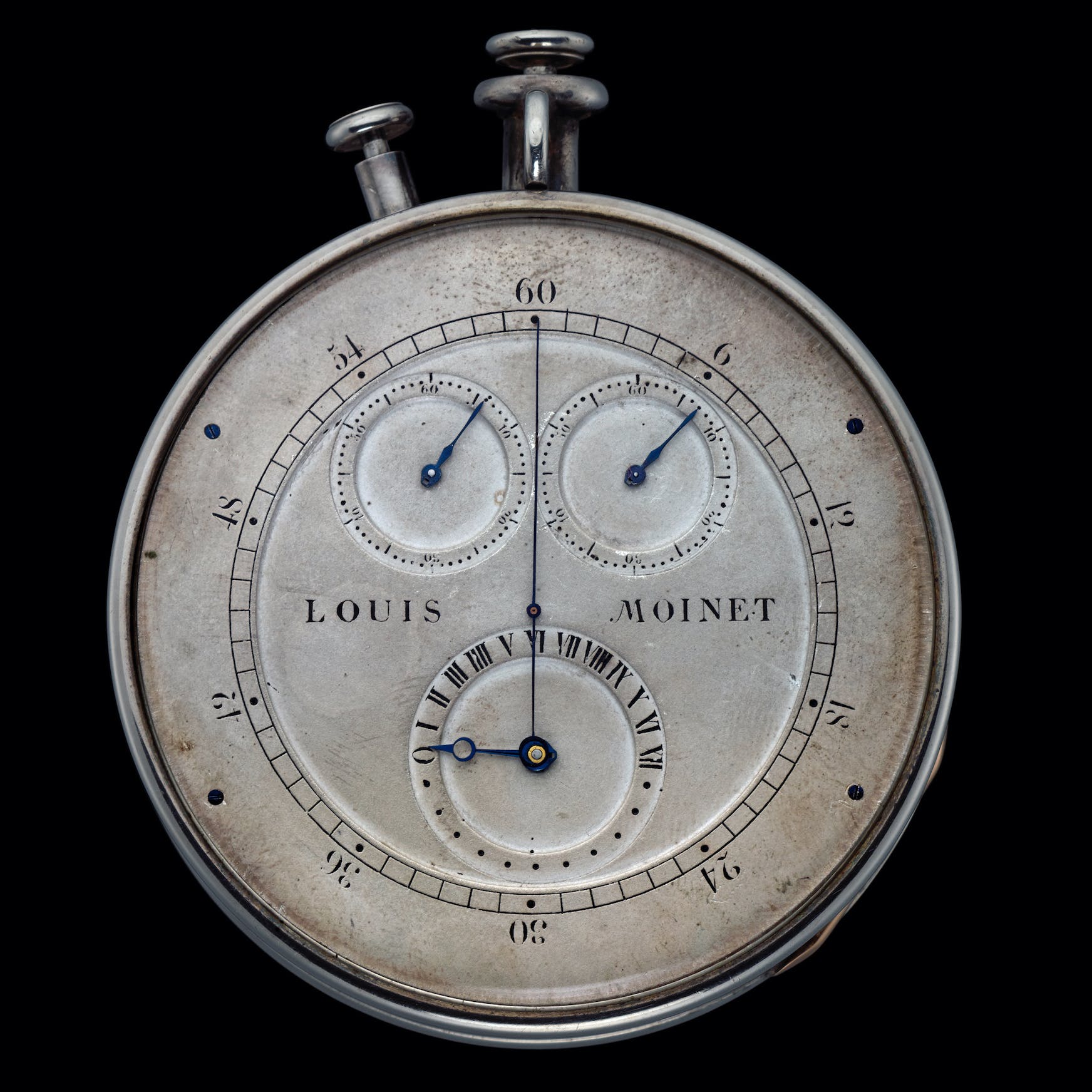 Chronographs are probably the most common complication, or additional function, found on modern wristwatches. Almost every watch brand will make a few different chronographs.

If you want to see some of the wide range of chronographs available from the big luxury brands, then make sure to sign up to our latest event, which is taking place at Watches of Switzerland in London on April 12th. You can sign up here.

What Is A Chronograph?

A chronograph is a watch with a stop-watch function. It can be used to measure how much time has elapsed. It is usually started and stopped by pressing a button near the 2 o’clock position on a watch. You then reset the chronograph by pressing a button at the 4 o’clock position. If you want to learn more about how they work, here’s a quick blog post.

A modern IWC Spitfire Chronograph. You can clearly see the pusher buttons at 2 and 4 o'clock

What Was The First Chronograph?

The first chronograph pocket watch was designed by Louis Moinet in 1815. Its purpose was to serve as a pocket stopwatch for astronomers. It is remarkable in a few ways; firstly, it was largely unknown until 2012; secondly, it operated at a ridiculously high frequency (216,000 vibrations a minute), which is approximately 8 times faster than a modern chronograph. This meant that it was a fantastically accurate recorder of time and could record time to 1/60th of a second. A remarkable achievement.

What Was The First Chronograph Wristwatch?

By the early 20th Century, pocket watches were being replaced by the more convenient wristwatch. As demand for wristwatches grew, particularly driven by military and professional users, so did the demand for chronograph wristwatches.

What Was The First Automatic Chronograph Wristwatch?

Over the next five decades, many watch makers released their own versions of the chronograph wristwatch. Anywhere that it was important to accurately keep time, a chronograph could, and often was, used. Chronographs continued to be used in aviation and the military, but the 1960’s saw the start of the connection between chronographs and motor racing. This was spurred by Heuer. The brand had been putting tachymeters, a tool used in conjunction with a stop-watch to calculate speed, on racing car and aircraft dashboards during the 1960’s. In 1967, Heuer released a wristwatch with a tachymeter and a chronograph, called the Autavia, which became very popular. You can read more about Heuer, the tachymeter, and racing here.

An Original Zenith El Primero from 1969

The first watch to feature a chronograph and an automatic, self-winding, movement, was the Zenith El Primero. Before then, all chronograph wristwatches were hand-wound. The Zenith El Primero has a fascinating story, which we’ve written about here. The watch was almost lost to the quartz crisis, but an engineer hid the tools in an attic of the factory, where they were found decades later, and used to revive the model, and the watch brand itself.

A technical drawing of the Project 99 movement, that became the Heuer Calibre 11.

The past hundred years have seen a constant stream of new chronographs released; however, some of the older models quickly established as classics have remained so, and are some of the most coveted watches today. The Rolex Daytona, the Omega Speedmaster, the Breitling Top Time and the Tag Heuer Monaco, are all old designs that have not only stood the test of time, but are thriving in the modern watch market.

How do brands, which need to release new models every few years, compete in a market-place that seems to know what it wants? They tend to try to make small innovations. Either in the materials used, the accuracy of the movement, and sometimes even the way that the counting of time is displayed. My favourite example of this is a watch that was released this week. The new Patek Philippe 5470p typifies the modern chronograph, albeit in a very expensive and exclusive way. Hodinkee have written a very detailed article explaining how it works, which you can read here.

If you want to try on and compare chronographs, come and join our event on Tuesady 12th April. We are hosting it in a Watches Of Switzerland Boutique in London. We are focusing on watches made by Breitling and Tudor, two brands with a long history of making excellent chronographs. Make sure to sign up here.

As we grow our community, we need help from our members to find like-minded watch collectors. Please send this blog on to anyone you know who likes watches.

How To Buy A Watch In A Store