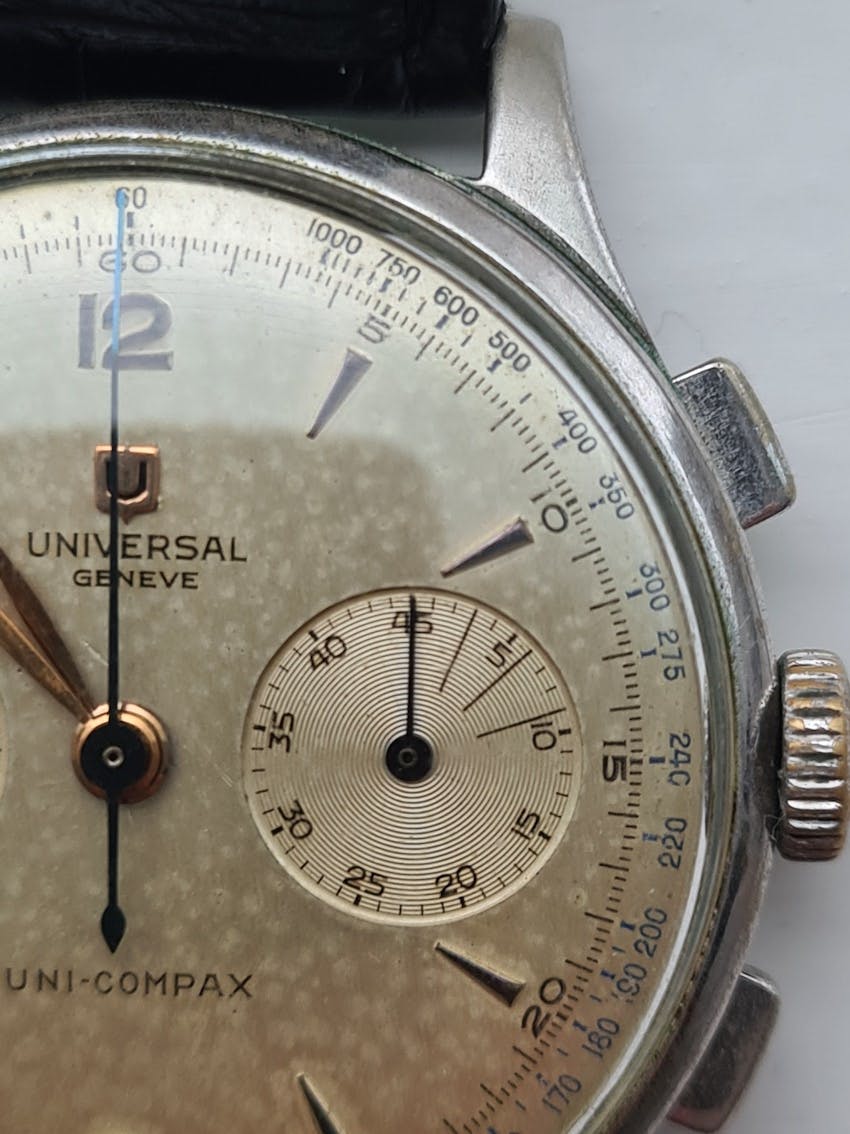 Racing, Heuer, and the Ever-Present Tachymeter

Racing, Heuer, and the Ever-Present Tachymeter

You will have seen a common design feature on chronographs, or stop watches, is a Tachymeter scale. But what is it for and where did it come from?

The details of how they work are straightforward, it’s a visual representation of a simple formula. How they ended up used on wristwatches is a much more exciting story.

People have been desperate to accurately time races since for as long as they have held them and the first chronographs were developed to time horse races. Pocket watch chronographs were common by the end of the 19thcentury, and some featured Telemeter dials. These were not designed to be used in when moving, especially as many of the dials were made from enamel, which shatters easily if it gets knocked.

Breitling invented the first single pusher, or button, wristwatch chronograph in 1915. As this innovation spread around the watch industry, many dials were created with scales on, including interesting variations of the tachymeter. These dials were made from painted metal, so avoided the problems with enamel.

In the 1950s Omega were working on a new set of watches designed to be used at Tools.  One was a chronograph, cleverly named the “Speedmaster”. In order to make it stand out while keeping the dial design similar to it sister watches the Railmaster and Seamaster, Omega engraved the tachymeter into the bezel, or ring, surrounding the dial on the outer case of the watch. A legend was born.

Omega Speedmaster and Rolex Daytona - both with Tachymeters

How Does A Telemeter Scale Work?

Very simply, it measures the average speed of something moving between two points. If you were observing a car moving down a road between two posts a mile apart, you would start the timer at the first post, stop it at the second, then read where the second hand was pointing to on the tachymeter. If it took a full minute to make the distance, then the telemeter on the dial tells me that the average speed was 60 miles per hour.

Of course, you can use any distance and any unit of measurement, as long as you are consistent. You could use it for people running over 100 metres if you remember to convert the average speed unit back into the units of distance. If I time a female athlete running 100m in 15 seconds, then I look at the tachymeter and it records 240. I calculate 240 times 100 metres to find an average speed of 24000 metres per hour. I can then convert this into miles per hour, kilometres per hour, etc.

Racing and Tachymeters On the Bezel

In the 1960s, motor racing was cool. It was fast cars, good looking drivers, and the stars of the track risked their lives driving at 200 miles per hour with few safety standards (Please note that many scenes in this documentary could be distressing). It became a global sport, those stars became glamourous jet setters, and thanks to the Heuer watch company making dashboard timers, Jack Heuer was at the centre of the action.

Jack was the grandson of the founder of the Heuer watch company, and he joined the business at the end of the 1950s. His flair for design and passion for racing saw him introduce the Autavia in 1962, and the Carrera 1963. Both were motor racing focussed. In 1969, to celebrate the introduction of Heuer’s new automatic, or self-powered, chronograph, he updated the Autavia with something special: a Tachymeter on a turning bezel. This allows the user to move it round to time additional segments, such as laps of a track, making the Tachymeter even more useful as a tool for motor racing.

Also in 1969, Zenith launched their legendary El Primero chronograph, and Omega’s original, the Speedmaster, was worn on the moon by Buzz Aldrin. Today, all of these models still sport the Tachmyeter proudly on the bezel, and collectors and enthusiasts obsess over the smallest details of different models from the past 50 years. Just this year, an updated El Primero was released, and Tag Heuer has returned to the Carerra model, cementing a partnership with car company Porsche and a bold new watch featuring a Tachymeter on the huge ceramic bezel.

We at The Watch Collectors’ Club don’t have a favourite chronograph, and if we are honest, have never actually used a Tachymeter! We own a few chronographs and love how different Tachymeter designs can be found on dials and bezels, and think the inclusion makes for better tool watches. If you like chronographs, we encourage you to explore the huge range of modern and vintage pieces, and who knows, you might one day use that Tachymeter in action!

What Is A Chronometer