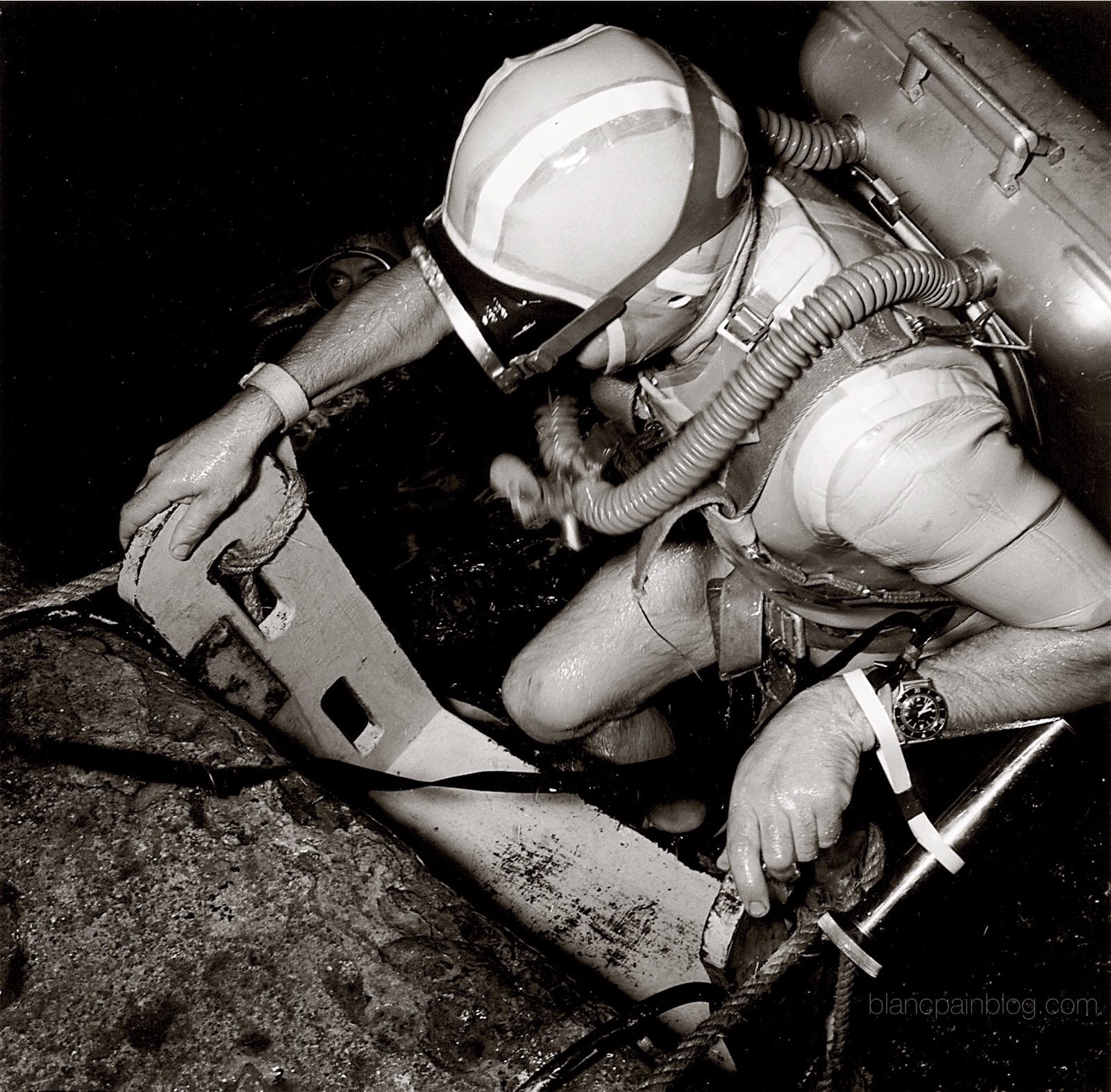 The Frogmen and the Birth of Military Diving Watches

The Frogmen and the Birth of Military Diving Watches

The diving watch, which is arguably the most popular type of modern watch, has a fascinating history, involving spies, underwater explosives, and sabotage. This is part of that story.

The first watch that was built for diving was the Omega Marine, which was commercially produced  from 1932. It had a rectangular case and was capable of remaining waterproof up to 135m below the surface.

Around the same time, Panerai was commissioned by the Italian navy to design a watch for its special underwater diving force, called the Regia Marina. These watches were built for Panerai by Rolex, using a cushion case, and a new type of “lume” to make it easier to tell the time in murky water. Over the next 30 years, these watches would be refined and come to be known as the Radiomir. This is now one of the two models that Panerai is now known for.

Robert Maloubier and the Frogmen

One of its two initial leaders was Captain Robert Maloubier who has a particularly interesting story. During the second world war, he worked for a secret British espionage unit called the Special Operations Executive. This unit was tasked by Winston Churchill with sabotaging and spying on Nazi forces in occupied Europe. Maloubier was a particularly effective agent, destroying a German-captured power station and steel plant. During one mission he was shot in the lung and intestines yet managed to evade capture and trek 9 miles to an allied hospital. Six months later he parachuted into France again to undertake another mission. After the war, Maloubier helped to set up the Nageurs de Combat, or “combat swimmers”. This is the French version of the US Navy Seals, and they have been involved in a long list of daring missions over their history, including saving lots of ships from pirates.

The Frogmen’s Need For A Watch

When Captain Maloubier was ordering equipment for his new force of underwater soldiers he had everything he needed, except a watch with which to time missions. Alongside Lieutenant Claude Riffaud, he sketched out the features and functions the watch needed. This included a bezel that could turn clockwise and anti-clockwise and lock, and a clear, large, easy-to-read dial with very bright luminous hands and indices to make it easy to read underwater.

The French watchmakers he approached did not see a commercial future for the watch, so they approached Jean-Jacques Fiechter who was the CEO of Blancpain, and a keen diver. Blancpain set about turning the designs into a watch, which would eventually be issued to the Nageurs de Combat. This model was called the Fifty Fathoms, which was the depth to which the watch would remain waterproof. This is a little over 91 meters.

The model would prove so successful that a US-made version was commissioned by the US Navy Seals, built by Tornek-Rayville. Models were also issued to Spanish, German and Israeli military divers.

The Lasting Legacy of The Fifty Fathoms

Unlike many Swiss watches, the Fifty Fathoms was not initially sold in fancy jewellery shops. Instead it was sold in specialist diving equipment stores, cementing the watch as a diving tool first, and a wristwatch second. Within a few years of its release, almost every major swiss brand, including Rolex, had released a diving watch with a similar set of characteristics to the military-spec Blancpain Fifty Fathoms.

Despite diving becoming an increasingly civilian activity, the functionality required by Bob Maloubier and Claude Riffaud made diving watches an incredibly useful tool for the modern diver. If you want to find out more about why diving watches are so popular now you can read a blog here.

If you’re interested in finding out more about the history of the Fifty Fathoms, there is a great video documentary that you can watch here. Or, if you want to see an original Blancpain Fifty Fathoms in its natural habitat, you can watch Jacques Cousteau’s most famous film: Le Monde du silence. All of the divers wore a fifty fathoms watch during filming.

If you found this story interesting, and want to learn more – let us know by signing up to our mailing list and coming to one of our in-person or virtual events. Details of those can be found here.

We need people to build this community. If you know of anyone who likes watches, of any kind, please let them know about us, and tell them about our events. It'd be great to have them along.

How to Research a Vintage Watch

We explain how starting a small watch collectioncan be very easy