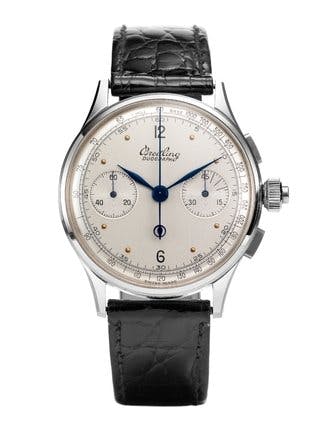 Breitling are a company we keep returning to on the Blog Series because we really like the watches and there are so many stories to tell. At our event this week we are focussing on their long history of innovative chronographs. This Blog Post will run through some of their most interesting historical watches so you can see the inspiration in today's range.

Breitling was founded in 1884 as a manufacturer of timing instruments such as stopwatches for industrial and leisure use. They went on to create pocket watches and then wrist watches beginning in the early 20th century.

Early Breitling ad from the end of the 19th Century showing the factory in Chauf-de-Fronds. Image courtesy of breitling.com

The Invention of Chronograph Pushers

During the 19th-century various designs for pocket watch chronographs, or stopwatches, featured separate buttons, or pushers to control the timing mechanism of the stopwatch part of the watch. Making this idea small enough to fit into a wristwatch case was very difficult, but Breitling were one of the first to achieve success and patented their invention in 1915.

Willy Breitling took over the firm in 1932, and the story of his leadership of the firm is one of a long string of successes. In 1934 they were the first to patent and launch a chronograph as we know it today, with two pushers in the positions we are familiar with them today, at 2 O'Clock and 4 O'Clock, with one to start and stop the mechanism and the other to reset it. This was highly convenient and was a great success. These watches were called the Montbrilliant series after the name of the factory.

Early Breitling Chronograph with one pusher at the 2 O'Clock position. Source: breitling.com

Launched in the early 1940s the Premier line was a line of very smart dress chronographs. They later included interesting complications such as the Duograph split-seconds chronograph and a calendar chronograph named the Datora. In recent years Breitling has relaunched versions of these watches in an amazing array of dial colours. We've written previously on different types of chronograph, and Breitling has made them all at some point.

A Breitling Premier from the 1940s

A Modern Breitling Premier from the Current Range

This is the first watch that included a technology that was revolutionary at it's time but today baffles most of us; a circular slide rule. It was added to a watch by Breitling's designers in 1942, so right in the middle of WWII.

A slide rule is a device that facilitates calculations, and in this case it facilitates multiplication and division so that a pilot can convert speed into distance and calculate fuel usage etc. The Chronomat was a success, but nothing like the later Navitimer. It came in different metals and styles and is a much more all-round watch and was sold widely right through until the 1960s.

A Breitling Chronomat from the 1960s with the Slide Rule Bezel on the outside.

This is one of the most iconic watches of the 20th century and has been ridiculously popular since it's original launch in 1954 on sale to the American Owners and Pilots Association. It went on global general sale in 1955.

This was a bigger version of the Chronomat, with a larger scale allowing for large calculations, as well as the chronograph function. The manual and operating guide from the first series is great, and it really is a fascinatingly complex tool. At first, the watch was only available to members of this organisation, but Breitling swiftly made it available for general sale. It has been on sale almost continuously since then, with a recently expanded and updated range launched just this year.

Explanation of the Navitimer's main features.

These were a new departure for Breitling. They essentially took the Premier, Datora and Duograph ranges and updated them for the 1960s. They made something very sleek and slick. These were made from 1964 through to the mid-1970s and evolved slightly, but had a cushion case as well, which apparently were more popular.

There was also a version with three registers, or sub-dials called the Top Time Long Playing as the third dial was to register elapsed hours, which is useful for timing motor racing or other long events.

A vintage Breitling Top Time from the 1960s

Breitling have always had chronographs as the core of their offering, and the current range offers a huge number of different models. Most of them are powered by in-house movements, and all of them are Chronometer rated to demonstrate a high standard of accuracy and reliability.

The modern Navitimers are still as popular as ever and now come in a great range of colours, suiting the current fashion for colourful dials in the watch world. You can even buy a re-creation of an original 1950s model that is entirely faithful to the first series design, but built to modern standards.

One of the new colourful Navitimers introduced this year.

Breitling has a long and innovative history when it comes to making chronographs. We at The Watch Collectors' Club do not have a favourite brand or type of watch, but love exploring the heritage that stands behind watches currently available today. Join us to explore brands old and new across the watch world, by signing up to our Blog Posts and attending one of our events.

What to expect at a Watch Show

A Short history of Women's Watches